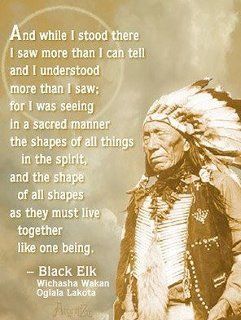 (completed September 2001).  For orchestra.  Awarded the “Masterworks Prize” for 2006: selected as one of the winning works to be recorded and included in volume nine of ERM Media’s compact disc series “Masterworks of the New Era” – first released September 15, 2006.  Performed by the Kiev Philharmonic under the baton of Robert Ian Winstin.  On September 9 of 2014, Parma Recordings released a revised and remastered edition of this performance on the Navona Records CD album, “Luminescence”. (ca. 12 min. 30 sec.)  (This is the full version as an MPEG Audio file.)

Leaves falling from the Holy Tree was composed in 2001 in memoriam Nicholas Black Elk, holy man of the Oglala Sioux.  As a teenager, I first read the book, Black Elk Speaks, an autobiography in which Black Elk recounts his spiritual journey from young boy to old man.  This man’s life story had an enduring effect on my own spiritual quest and awareness of the world.  The power and force of his great vision; the thrust and travels of his life; the melancholy that seemed to invade his later years, when as an old man he felt he had failed his people as a spiritual leader––all of these aspects are interwoven into the various textures, musical imagery, and emotions of this orchestral piece. Following is an excerpt from Black Elk’s account of his great vision.

“When we came to the end of the first ascent we camped in the sacred circle as before, and in the center stood the holy tree, and still the land about us was all green.  Then we started on the second ascent, marching as before, and still the land was green, but it was getting steeper.  And as I looked ahead, the people changed into elks and bison and all four-footed beings and even into fowls, all walking in a sacred manner on the good red road together.  And I myself was a spotted eagle soaring over them.  But just before we stopped to camp at the end of that ascent, all the marching animals grew restless and afraid that they were not what they had been, and began sending forth voices of trouble, calling to their chiefs.  And when they camped at the end of that ascent, I looked down and saw that leaves were falling from the holy tree.”